You are Karaoke Ken the Kung Poo Fighter, who is trying to avoid being hit by the flying and bouncing bog rolls.

You simply have to avoid being hit by the toilet rolls, amassing the highest score you can by surviving as long as you can from being struck by a turd threatening roll of tissue.

This is yet another a simple casual high-score chase game that gets progressively harder the longer you play it.

This game was created by myself for the Commodore 64 as an entry for the RESET64  C64 4KB Craptastic Compo 2020.

This is a competition for creating a 'crap' game in 4 kilobytes or less (compressed file size).

Code and graphics  by yours truly, Roysterini of MEGASTYLE.

A bit of extra info. The fighter graphics are not sprites, but characters. Only one sprite was used for creating the overlay detail for the eyes.

All other sprites were just for the toilet rolls.

Everthing else was petscii/ascii gfx.

I have uploaded a new build that has better input control. I noticed the controls in the previous uploaded version were a bit temperamental. So, this  new build should improve that.

I figure I must have affected the input control code when I was optimising, trying to fit under 4Kb. Harrumph. Such is life, eh?

If you would like to try all of Megastyle's other C64 Craptastic entries for the 2020 compo, you can find them here: https://megastyle.itch.io/the-megastyle-4k-craptastic-bundle

If you want more, you can check out ALL the entries to the comp (over thirty) by downloading the zip files here. Go check them out, there's some real corkers in there. Each game 4Kb or under. (compressed file size).
https://reset64-magazine.itch.io/2020-reset64-4kb-craptastic-game-compo/devlog/159070/craptastic-zip-update

Lastly, for those of you who like Pico-8 stuff, I also made a Pico-8 version of Kung Poo Fighter with some extra features that didn't make it into the C64 4Kb version for memory reasons.

As with my other C64 games, you'll need an emulator like Vice 64 or Frodo. Or if you're able, play on real hardware by copying the D64 file to disk or using something like 1541 Ultimate cart.

Great little time waster! Look at https://cbm8bit.com/highscores/game/c64/?game=Kung+Poo+Fighter to challenge me for the best score :P 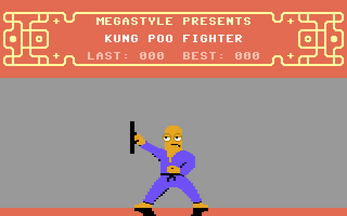 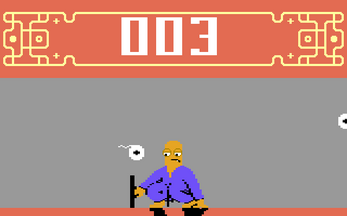