A downloadable game for Windows

I  wrote this C64 game in 1992 and it was released by Double Density back then.  Can be played in your favourite Commodore 64 emulator. This is the PAL version (if playing on hardware).

This is the uncracked, untrained version.

I decided to add this back into my collection of games I've made from back in the day.

Just download the PRG file and run with VICE 64 emulator or Frodo...etc

I tried Hektic the other day and it's so brutally difficult I can't see me playing it again.

Thank you for making a simply fantastic platformer that looks fantastic, sounds fantastic and is a joy to play.

Thank you, that's very nice of you to say.

If it were possible I would ask for some plot of this game if it had one. The plot is not available on the Internet.

To be totally frank, there's not much plot to it other than you just need to retrieve the droids. I was just 'winging it'.

However, with Hektic III (a game I planned on doing recently), there is a story and plot that ties things up with Hektic 2 and adds a back story.

It's uncertain (probably unlikely) as to whether I'll ever get to make Hektic III, but I did start a 'Director's Cut' of Hektic 2 that has an end sequence that leads to Hektic III.

Hektic III is intended to be more action adventure.

I do have several started projects that are not shown here. I don't see much point in posting them.

I did post Humpy though as the actual game is there, barring some title screen and other stuff.

Thanks for sharing first hand. I hope you will share more of your work in which you participated, and here I played:

Thanks for playing. You played it the hard way. You can push up to jump! Hehe 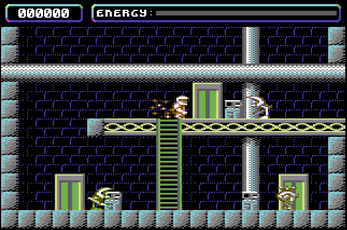